Located in the South, Phuket is well-known to be the best destination for a wonderful beach vacation when in Thailand with the beauty of alluring sandy beaches, breathtaking seascapes as well as charming historical and cultural spots. There are a lot of things to see and to do that always keep you occupied with a wide range of activities in Phuket. It comes as no surprise that here is one of the most popular tourist attractions in Thailand.

Read More ...
Top things to do in Phuket, thailand 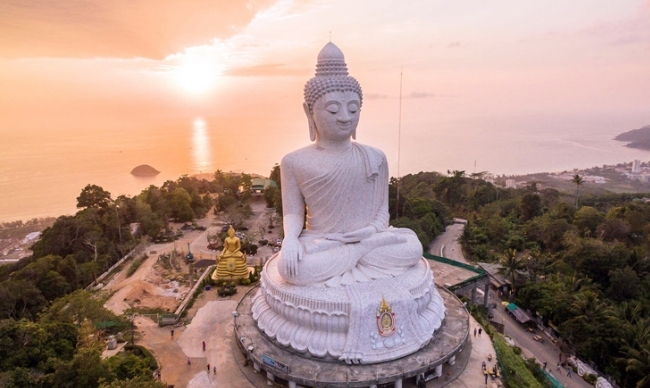 Big Buddha Phuket is a beautiful place that offers an amazing view of Phuket. The Buddha looks great from afar until when you realize how majestic it is once getting closer. The temple gives you a spiritual ambience and if lucky, you might have an opportunity to be blessed by a monk. The site is quite busy, still, it is well worth a visit when in Phuket. 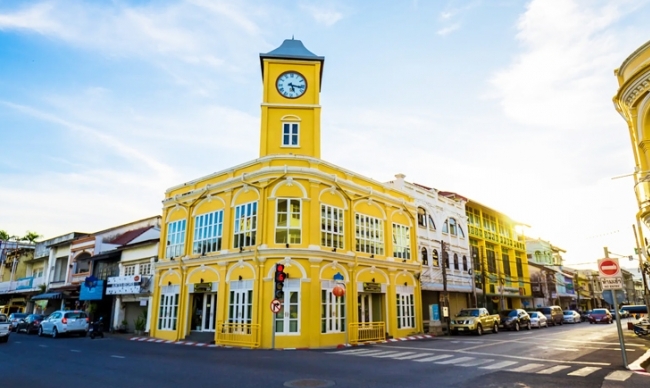 The old town still remains many old architectures influenced by many different cultures from the Western to the Orient, which is not like Thailand at all. There are diverse arrays of shops, eateries, and colorful old buildings in the town. You can spend time walking around the streets and taking several nice pictures with these unique-style houses. 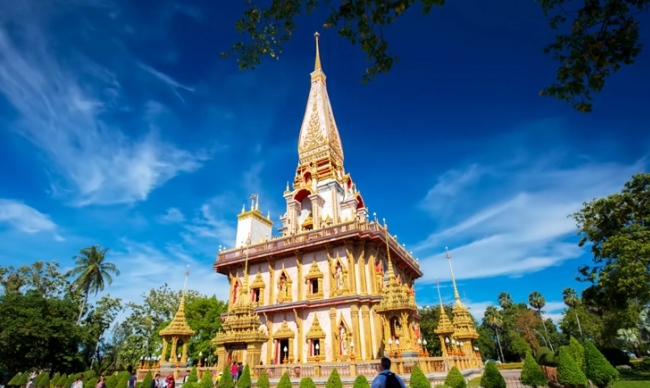 Wat Chaolong is one of the most beautiful temples in Phuket, which is around 8km from Phuket’s centre town to the South. It is built in King Rama II Dynasty and has the typical features of Thai Buddhist Temple architectures, impressive and gorgeous from the outside to the interior. Wat Chaolong is regarded as a sacred temple in Phuket and stands for the religious aspect of Thai people. 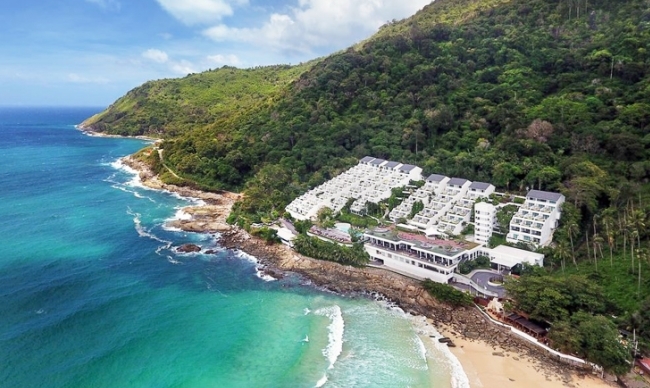 Located to the South of Phuket Island, Nai Harn Beach is quiet, peaceful and not as crowded as other main popular beaches in Phuket. The water here is amazingly blue turquoise and pretty calm so that tourists coming here can enjoy the tranquil scenery. A good place for swimming, walking around and spending time with beautiful nature. 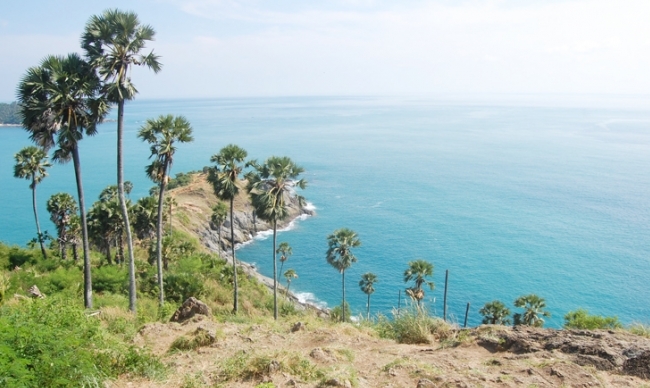 This is one of the best viewpoints in Phuket that tourists can admire the stunning beauty of the Andaman sea at any time of the day, especially when the sunrise and sunset comes. You can take a motorbike ride or choose a walk to Promthep Cape, each option is also a great experience to contemplate the surrounding landscapes.

The Best Phuket Private Tours For You

Best known for a fascinating eco-tourism attraction, Khao Sok National Park is the perfect place for nature lovers or adventure seekers who are looking for some enjoyable treks amidst dense jungles. On this amazing tour, you will have 2 days to explore the natural beauty of this national park with...

Leave the crowds and bustling cities behind to stay close to the nature of Khao Sok National Park on this fascinating 3-day tour. Enjoy a great time amidst dense jungles as well as spot some special animals and tropical plants during the treks. Soak in the relaxed vibe of Chiew Lan Lake, one of the...

Phuket is home to some of the finest beaches in Thailand with endless white sand stretches, green palm trees and glittering seas. On this 4-day tour, you will get the most out of your holiday in Phuket’s islands with numerous exciting activities such as taking speedboat trips to the nearby...

Searching for a relaxing vacation or a short escape from bustling tourist hubs of Thailand? Check out this 4-day holiday taking in sites around Phang Nga Bay that offers you the best experiences in southern Thailand. Whether cruising around the dream-like Chiew Lan Lake, soaking in the unique...

Are you looking for a-week-long break in Thailand? Do you wish a relaxing trip in Thailand? This incredible 7-day vacation in Bangkok and Phuket will the best time to escape from work and daily stress. Let’s leave behind the worries and soak in the azure blue water of Phi Phi islands, laze all...

Thailand is a fantastic honeymoon destination that provides newlywed couples any kind of guided tours, whether you prefer a beach holiday, a jungle exploration or a cultural heritage discovery. To save your time, check out this 8-day honeymoon itinerary that gives you a chance to experience the...

Kick off in the exotic capital of Bangkok with its major highlights. Venture north to see diverse cultures and age-old traditions in Chiang Mai. Wrap up with some fun island time on Phuket’s best beaches and islands. Those are what you’ll experience on this amazing 9-day tour in Thailand. You...

With rich cultures, majestic temples, and white-sand beaches, Thailand is absolutely a favorite tourist destination for family vacations. On this 9-day Thailand tour, your family will not only enjoy a wonderful time together to tighten the bond among members but your kids also have a chance to join...

Explore the stunning contrasts of Thailand on this amazing tour that takes you to two different worlds. Over 9 days, this city and beach experience will give you ample chances to visit Bangkok’s ancient temples beside modern skyscrapers, indulge in its busy nightlife before venturing south to hit...

Splendid golden temples, colorful hill tribes, adorable elephants, beautiful white-sand beaches and green idyllic islands are what spring to your mind when it comes to Thailand. On this nine-day tour, you will experience it all and bring back home unforgettable memories about the Land of Smiles....

Thailand is all about impressive golden temples, fantastic floating markets, colourful hilltribe villages, majestic elephants, and exotic hideaways – and you will have the opportunity to experience it all on this amazing trip. Within 10 days, this tour package takes you from the vibrant capital...

If you’re seeking a quick overview of Thailand, then look no further with this Enjoyable Thailand Trip 10 Days. You will not only spend time on the idyllic beaches and islands of Phuket that you see on Thailand postcards but also enjoy the country’s highlights with cultural capitals, golden...

On this 12-day tour in Thailand that is a perfect blend of relaxation and discovery, culture and nature, you will traverse from modern cities to anicent capitals, from hill tribes tucked away in the mountains and jungles to secluded white sandy beaches. You will cruise the famous Chao Phraya River,...

What better than traveling to a country like Thailand with your family members and introducing your kids to a very different world on this Stunning Family Tour in Thailand. During the 12 days of this journey, your family will experience all the best of this diverse country, from the modern capital...

Perfect Vacation in Thailand for Couple

Experience Thailand at its truly best on this 12-day Wonderful Thailand tour that takes you to places both remote and well-known throughout the country. Start off in the Thai capital of Bangkok with iconic Buddhist temples, ancient palaces, and followed by a short trip back to the past of Siam from...

With pristine tropical islands, limpid turquoise waters, abundant coral reefs and swaying palm trees, Thailand is a paradise for beach-goers. In this 13-day tour, you will enjoy a long beach escape to some of Thailand’s best islands with ample time for relaxation and touches of adventure. Spend...

Thailand is best known for sacred Buddhist temples, colorful hill tribe cultures and most excellent beaches on earth, yet there is so much more to discover in this “Land of Smiles”. On this 13-day tour that shows you the best of Thailand, let’s explore the different vibes of Thai markets,...

The Boutique Discovery in Thailand 13 Days is all about exploring the best of Thailand at its three most-visited cities. You will go temple-hopping in Bangkok, experience a train ride on the legendary Death Railway, trek along the natural trail of Erawan Waterfalls, visit hill tribal villages of...

The authentic & unique experiences in Phuket you can expect

Taking a spectacular island-hopping tour around stunningly beautiful islands of Phang Nga Bay and the Andaman Sea surely ranks as one of the best experiences in southern Thailand. Whether embarking...

James Bond Island, locally named Koh Tapu, is a famous landmark in Phang Nga Bay that travelers should not miss when in Phuket. Together with Khao Phing Kan, the island surrounding it, Koh Tapu...

A leisurely day trip cruising through towering limestone islands of Phang Nga Bay is one of the best experiences you should not miss when traveling to the Land of Smiles, Thailand. This tropical...

Phuket lies off Thailand’s west coast in the Andaman Sea. The main island, Phuket, is connected with the nearest province to the North, Phang Nga, by the Sarasin Bridge

Covering a total area of 573km2, Phuket is the second-smallest province in Thailand. According to the 2018 census, the province’s total population is 410,211 people

Phuket features a tropical climate with two distinct seasons in a year. The temperature here averages 29oC and the precipitation falls around 2220mm annually

Once a place of tin mining, Phuket has turned into the leading tourist spots in Thailand and in Southeast Asia in general. According to the statistics, about 10 million tourists flocked to Phuket in 2017

Besides tourism, Phuket is also known to be the land of rubber tree plantations, which makes Thailand the largest rubber producing country in the world 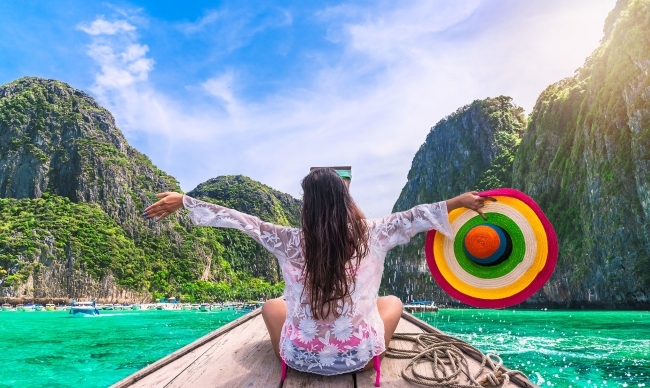 Tourists are recommended to visit Phuket between December and April. It is the busiest time here due to the dry and pleasant weather with sunshine, blue skies, and calm turquoise seas. September and October are two rainiest months in Phuket and significant rainfalls can prevent many tourist activities during this time. 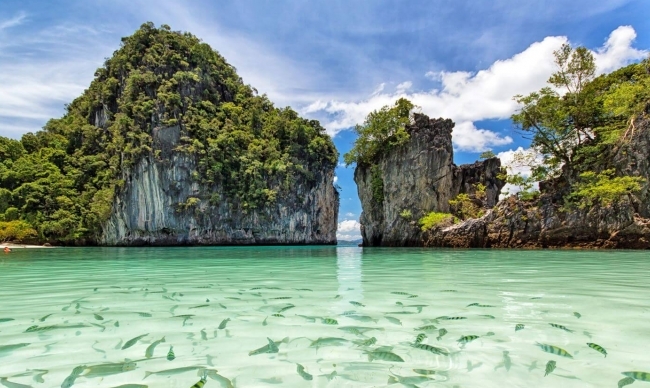 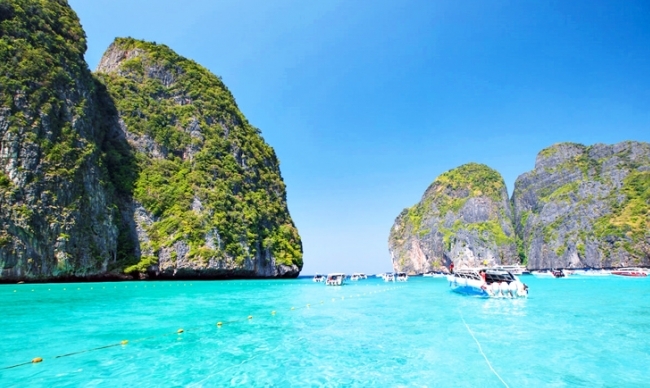